With crocodile tears filling her big brown eyes, and streaming down her face, my four year old choked out "Why did she die, mommy?"  Our family was watching a movie where the wife and mother died from Scarlet Fever. Hugging her close, I told her it was because she was so sick.  "But I was really sick, and I didn't die," she replied, as her body trembled with sobs and grief.  Those words about tore me in two!    It was time to try to explain the purpose of life and death - a concept that many adults struggle to wrap their brains around - or perhaps, more their hearts.

For those that do not know, when this particular daughter was not even two years old, she was extremely sick.  Hospitalized for over two weeks in a children's hospital, we had teams of doctors come in the room each day telling us they were not sure what to do to help her, or if she would leave alive.  A feeding tube had been inserted, trying to stave off malnutrition, due to her not eating or drinking anything.  Catheters were put in, and IV fluids constantly ran to keep her hydrated.  She hardly ever made a peep, even when they drew blood everyday, nor did her eyes ever open.  Her body was burning hot in attempts to fight whatever was invading.  The only thing the doctors could figure out what that she was fighting encephalitis and meningitis, but it wasn't the "normal" viruses or bacteria causing it.  They couldn't do anything for her, except try to make her comfortable... God truly was the only One who could heal her and no one else could take any credit!  And He did!!!  One day, her fevers finally broke, and she wanted milk.  When we brought her home, it was like having a large six month old - she couldn't sit up on her own, and could barely hold a bottle - but now she is doing fabulous, and you would never know any of this happened if you weren't told.

So how do you explain to a 4 yo why she didn't die when she was really sick, yet the mom and wife in the movie did?  I guess we could have told her "it's just a movie."  Or we could have just given her a "pat answer" - she is only four... But generally speaking, we are very open with our children about the truths of life.  This was no exception!

We turned to Scripture.  Psalm 139:13-16.  "For You formed my inward parts; You covered me in my mother's womb.  I will praise You, for I am fearfully and wonderfully made; Marvelous are Your works, And that my soul knows very well.  My frame was not hidden from You, When I was in secret, And skillfully wrought in the lowest parts of the earth.  Your eyes saw my substance, being yet unformed.  And in Your book all were written, The days fashioned for me, When as yet there were none of them."

We explained that God knows each child before he or she is ever placed in the mother's womb. Not only that, but He has already predetermined how many days each of us will live.  He has a purpose for each of our lives.  We explained that while the mother's purpose was complete, that our DD4 had not yet completed her purpose... that God still had more work to perform in her and through her.

With this answer, she was satisfied.  She said she was glad God still had work to do in her life and that He made her all better.  So are we!  We look forward to seeing how He works in each of our children's lives!  Praising God for His Spirit working in our daughter's life! 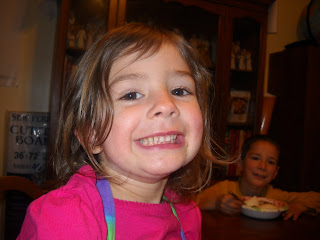