International Night was last night with our home school group.  What a fun time!  There were a number of countries represented, with traditional clothing, money, food, music, and so much more! Here are some pictures of some of the other displays. 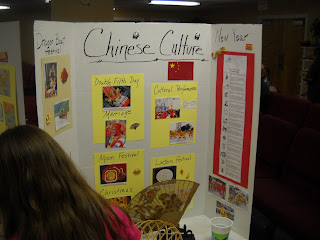 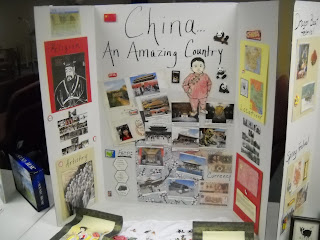 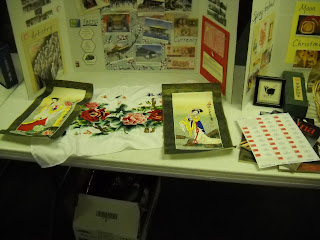 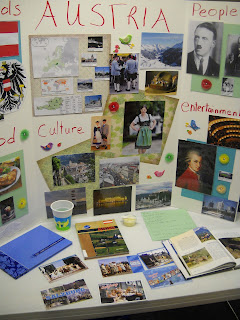 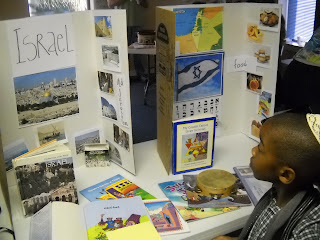 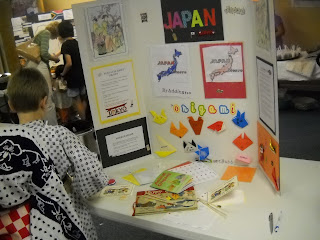 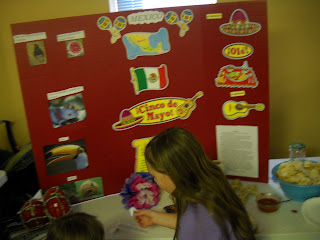 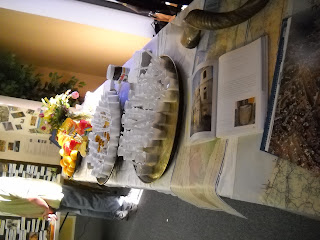 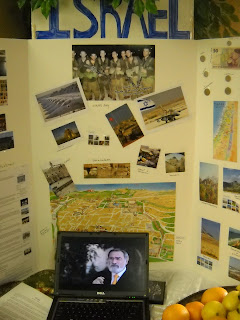 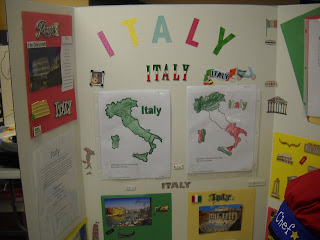 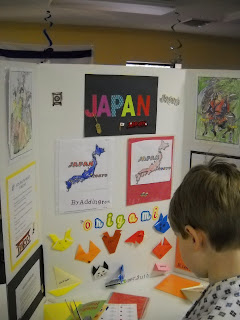 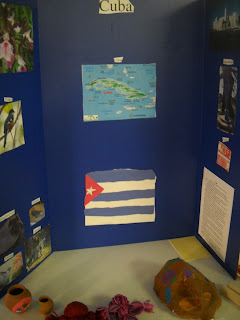 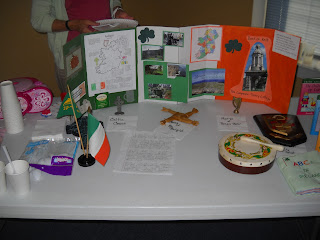 My four oldest decided to work together to display the United Kingdom, which consists of Wales, Scotland, England, and Northern Ireland.  What a fun time!  Each of the children chose one of the four countries to work on in more depth than what we had previously done.  We had our general try-fold board with lots of information, our lap book, and a 3-D puzzle of the London Tower Bridge.  We also made some white chocolate mousse.  We basically found a recipe from the United Kingdom, and "Americanized" it with what ingredients we could find here and in measurements we use :)  Basically we brought 1.25 cups of heavy whipping cream to a boil, poured it over 12 oz broken up white chocolate and mixed until creamy.  Then we added a softened 8 oz block of cream cheese and thoroughly mixed.  We let it set over night.  Yummy!!!! 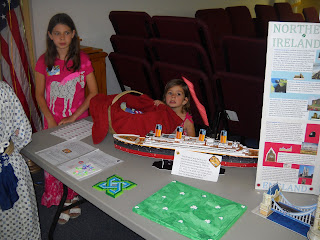 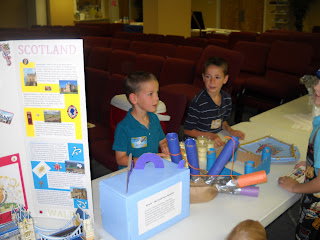 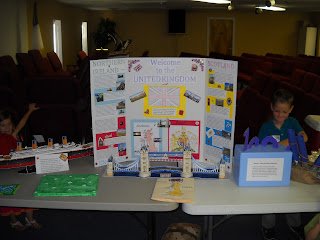 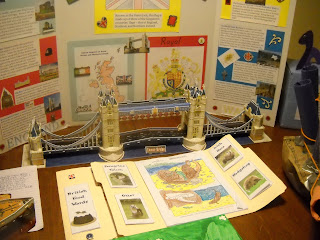 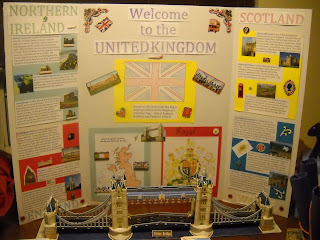 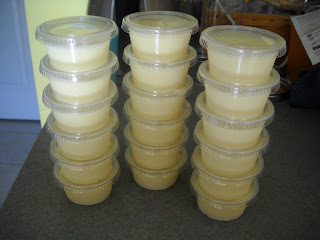 My youngest of the four chose Northern Ireland.  We brought the Titanic 3-D puzzle we had previously put together.  She also made a pearler bead celtic knot and a shamrock relief canvas.  The pearler bead craft was quite time consuming and frustrating for her at times (she is only four), so momma ended up helping some with it.  The relief project she loved!  I love that it is truly hers and she ended up basically doing a pattern, though she swears she didn't mean to :)  Basically, she put different size shamrock stickers on a white canvas.  She then took green paint and painted the entire canvas, including over the stickers.  After it dried over night, I helped her peel the stickers off.  The end result is a painted canvas project all of her own creating! 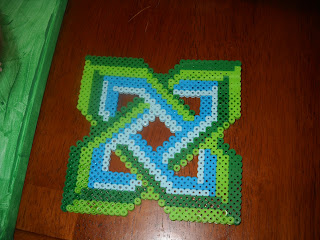 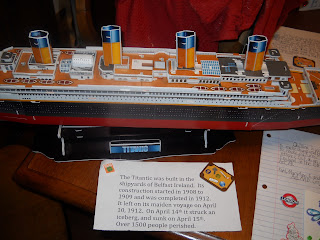 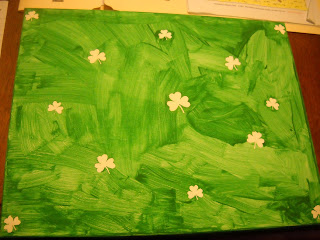 The next youngest of the four chose Scotland.  He had a blast working on his projects!  Two of the most famous things of Scotland are Nessie, the Loch Ness Monster, and bagpipes.  He was shocked to learn that a loch is basically a lake, so "Loch Ness" is actually the name of a lake :)  He decided to make his own replication of Nessie.  For somer reason (hey - who knows!), he decided Nessie is purple.  Then, since momma was not nice enough to buy him bagpipes (mean momma!), he decided to make his own of those as well.  It turned out really cute, and ummmmm, much quieter than the real thing :) 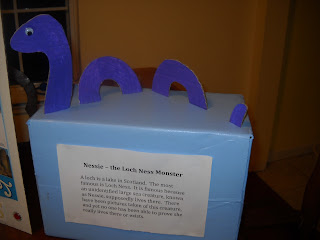 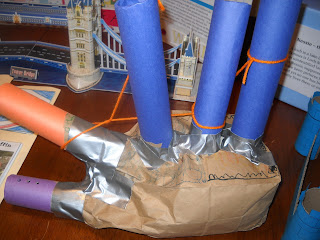 My second oldest took Wales.  For some reason, this country seemed more difficult.  There just didn't seem to be as much information or crafts that fit this country.  We finally settled on making a castle and a shield.  I think he much preferred making the shield, as he got to use paper mache and paint on that one :) 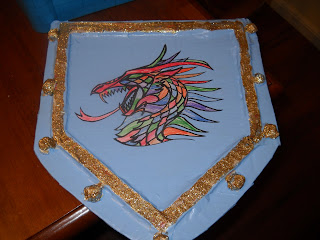 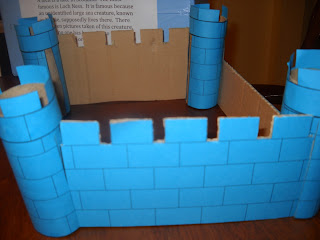 That left my oldest with England.  She took charge in an unbelievable manner!!!  She made over 100 pieces of sidewalk chalk to hand out and wrote a paragraph (with citations even!) explaining how the White Cliffs of Dover, England are made up of natural chalk.  She also did a gorgeous quilling project. While quilling is not thought to originate in England, it was there that it was first formerly a type of art (she also wrote a paragraph on that). 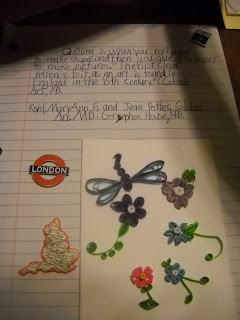 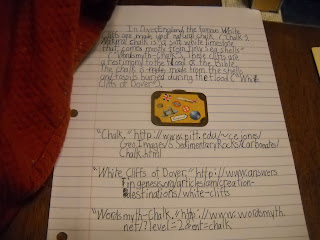 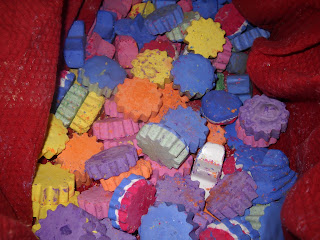 Overall, I think the kids learned a ton, from their own projects, each others, and from the other displays set up.  I'm sure they will be desiring to do something similar next year.  Next year our family will be focusing on Africa, Asia, and starting the United States for state studies, so we will see what they chose to do :)
Posted by Unknown at 7:22 AM